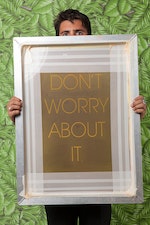 How did you come to work for YES?
I initially met JP and Romain while I worked at Nixon years ago, and I was a huge fan of everything UnInc since the beginning. Years later I was living in New York and we were re-connected through one of their sales reps. I was asked to help them out with a last-minute board graphic for the Optimistic. After that I started to work more closely with the brand.

How is it decided who makes the cut for the Greats series? Have there ever been any arguments about who gets in and who doesn’t?
Like all good business meetings, the best decisions happen over beers. They usually get everyone together at Romain’s house and we spend hours going over who we each think should make the cut. It’s always a really fun process and so many of the ideas for the whole line stem from there. I don’t think there’s ever been a time when everyone’s not fully agreeing on the final lineup; we have a harder time deciding which rider goes on which length, and which image to use.

The series went away last year – why was that, and why was it brought back so quickly?
I feel slightly responsible for that one. Some of us were worried about how long it could go on for before everyone got bored with the concept. The plan was to do a complete refresh on the YES Asymmetrical and then just keep the Greats as a special board that was done here and there when we felt it was the appropriate time to highlight influential riders. Every season we would have a huge list of great riders and humans that we all were influenced by, so it ended up coming back quicker than expected. 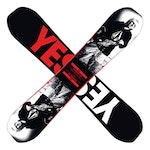 How much influence do the YES co-founders have on the design?
They’re a major part of it. Throughout the season they’re coming up with ideas, and making notes of artists they like and dislike. It’s really refreshing to work with owners that have strong opinions and stick to their guns about what they want. They also support each others’ opinions; if Romain doesn’t like the graphic on the Jackpot but knows JP and Austen [Sweeten] love it, he supports their decision 100%. Every team member and friend to the brand gets to voice their opinion on the boards that they ride. I always like looking back through all the stages of the design process and see how it evolves to the final product.

How do you source and select images?
We always get them from the riders themselves, or their family members. Out the gate, I think everyone has a couple images that they are thinking of, the timeless ones that are ingrained in all of our heads. After we narrow it down to a few that we all like, I start designing some options for the whole crew to look at.
I’ll never forget when I got the email with all the Jeff Anderson photos. Cheyenne Ellis, the photographer, sent over scans of all the original contact sheets and I was freaking out. The final image that we selected was one I remember from when I was younger, and being able to see all the behind-the-scenes shots from that photoshoot was really incredible.

Given that the images are all from different sources, what techniques do you use to make them into a coherent series?
I thought that would be challenging, but it’s been really simple. I have this old photocopier that I’ve lugged around with me over the years, and it produces the perfect grain. I literally just photocopy the images a couple of times, enlarge them and then scan ’em in. I think it gives them a real timeless quality and gives the whole series a consistent look. The riders featured this season all had a certain punk rock spirit with them, so I let the graphic be a little rawer but still kept the type real clean and simple to let the image be the focus.

Any plans for future versions of the series?
Oh yeah – we have a whole new take planned. I don’t want to give it away, but instead of just focusing on the rider we are diving into all their pro models over the years. That’s the whole purpose of the Greats series; to give respect to the individuals that shaped modern-day snowboarding.