Here we have a poor man who doesn’t own a mirror. The only time he gets to see his reflection is when he passes an unsuspecting window on his way to the chair lift. Poor Bugger.
He has to keep up the pretence that he likes the way he looks when he actually looks like a massive chump. Pensions just don’t pay out as much as they used to. 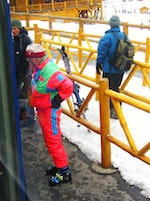 It just gets worse

After last week’s send in of a questionable fashion arrest, we’ve been sent in this stinker from Martin Queen. It seems that the slopes just aren’t...

It just gets worse

Here at Fashion Police HQ we have to go through so much paperwork to make sure these ‘fashion gurus’ come to justice. We get sent...