Massive congratulations to Whitelines contributor Lorenz Holder, who has just won the Red Bull Illume photograph competition with his incredible satellite dish shot of Xaver Hoffman. Lorenz bagged a bang tidy $30,000 worth of new camera swag for his efforts and incidentally also won The Open photography comp with the very same shot earlier this year: 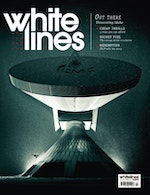 Without wanting to stroke our own egos too aggressively, we’re proud to say that Whitelines was the only snowboard mag in the world to use Lorenz’s winning shot as a cover (issue 107).

Let’s face it though, what were the others thinking by not using it? Sure, it doesn’t immediately scream snowboarding (and the untrained eye might miss Xaver entirely), but it really is an incredible shot considering the technicality of lighting such a gargantuan structure, at night, in heavy snow.

You can get yourself a signed print or canvas of Lorenz’s award-winning image over at RadShot.com

Guess what happens next? What the f*ck was that skier thinking?!

Part two of our series on Improving Your Edits

All the best bits from Nike's big movie premiere

Guess what happens next? What the f*ck was that skier thinking?!

Part two of our series on Improving Your Edits

All the best bits from Nike's big movie premiere

It's finally here! Could this be the movie of the year?!

Damn, what a section! If you've ever even sniffed at a rail, this will amaze you...

Jed Anderson - Never Not Full Part
We use cookies on our website to give you the most relevant experience by remembering your preferences and repeat visits. By clicking “Accept All”, you consent to the use of ALL the cookies. However, you may visit "Cookie Settings" to provide a controlled consent.
Cookie SettingsAccept All
Manage consent