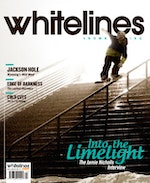 The December issue of Whitelines has landed in letterboxes and newsagents across the land, right as the UK’s streets are filling with snow. No doubt you’re all frothing to get your shred on right now, so why not take a look inside and turn the winter excitement levels up to 11…

ON THE COVER – FREE DVD: WELCOME HOME II
The sequel to last year’s Rip Curl team movie takes up the brand’s famous love of travel (a.k.a. The Search). Each rider takes turns having the rest of the team to stay in their home resort and shows them the best of the local terrain. From Argentina to Austria, Switzerland to Sweden, expect plenty of powder, laughter and lines. Starring Elias Elhardt, Victor Delerue, Nils Arvidsson, Janne Lipsanen, Victor Daviet, Remi Lamazouere, Mati Radelli and more.

THE JAMIE NICHOLLS INTERVIEW
At 17 years old, Jamie Nicholls has already won more British titles than you’ve had hot dinners, and his vast array of tricks – including double corks and mad rail skillz – have started to get him noticed on the international stage. We caught up with him for his first ever full length interview, and talk about everything from his Halifax dryslope roots to what it was like competing in front of 14,000 at this year’s Freeze Festival.

Still on the UK trip, we sent three of the country’s finest riders to the legendary powder mecca of Jackson Hole, Wyoming. This is the mountain Travis Rice grew up riding, where steeps are STEEPS, cliffs are CLIFFS and where men still walk around carrying guns. Would they be up to the challenge? And what would Johan Olofsson, Brian Iguchi and Kevin Jones make of the Brit crew when they joined them for a shred? Read it to find out.

LAPLAND – THE LONGEST NIGHT
No December issue would be complete without a visit from Father Christmas, so photographer Lorenz Holder and the Isenseven crew set out for the edge of the Arctic Circle, where the local resort experiences the shortest day of the year, anywhere in the world. As his stunning photos testify, though, strange things happen to the light when the sun is always low in the sky…

SHR-EDIT! – THE A-Z OF SNOWBOARDING ON FILM
We all love a good snowboard film, so here’s an entertaining read about the filmers, fashions, clichés and all round movie history that have helped make the sport what it is. This article will keep you entertained during many a repeat bog read. And that’s a Whitelines guarantee.

Oh – this month’s issue also includes a controversial Last Lift article that is already inspiring some heated debate on the internet. Get involved!

Check out our massive monthly competition for January

Check out our massive monthly competition for January

Gigi Ruf Interview: 9191 The Number of the Best

Despite having been around for more nearly two decades, Christian ‘Gigi’ Rüf is still something of a mystery to many people. Over the course of...

Gigi Ruf Interview: 9191 The Number of the Best
We use cookies on our website to give you the most relevant experience by remembering your preferences and repeat visits. By clicking “Accept All”, you consent to the use of ALL the cookies. However, you may visit "Cookie Settings" to provide a controlled consent.
Cookie SettingsAccept All
Manage consent