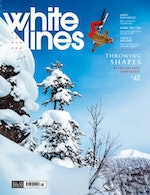 Somehow it’s spring already and we’re only just recovering from a month of Olympic madness and too much celebratory partying. But the excellent news is that another issue of Whitelines is out right now!

Alternative board shapes have shot up in popularity over the past few seasons. Everything from swallowtails to super wide tea trays have been gracing the slopes. However, over in Japan, these creative stick designs never really went out of fashion. Matt Georges snaps some of the locals’ favourites.

Ever dreamt of combining both surf and snowboarding in one trip? Chris Rasman and his crew of intrepid riders crammed into an RV and made the epic pilgrimage to Alaska for a once-in-a-lifetime helitrip before heading down to the surf the cruisy Pacific waves of BC. All in just two weeks.

We interview the world’s most accomplished female freerider, Annie Boulanger, as she tells us how she got started up and what it’s like to be “a woman in a man’s world”.

The History Boys: the men who collect snowboard

Collecting snowboards is a fast growing hobby with aficionados spending thousands of pounds to track down their favourite old sticks. Deputy editor Tristan chats to a few of the guys involved, including one fella from Berkshire who has 35 (!) of the 52 Lib Tech Jamie Lynn boards ever made.

2014 was the year snowboarding dominated the Olympics. We couldn’t finish the last issue of the season without one final recap of the Games’ most important talking points – from the controversial judging to Jenny Jones’ stunning success.

Our favourite jib sticks of the season

Danny McCormick breaks down his three favourite side hit grabs

Putting the best snowboarding gloves to the test

For £4.95, that’s an absolute bargain. Go forth and read! Sadly, this is our last issue of the season, but we’ll be back late August with the Whitelines’ Buyer’s Guide plus next issue comes out. In the meantime, keep checking out Whitelines.com – we’ll still be here!

Five stops including Alaska and Andorra for the first time

Halldor, Eiki and Gulli kill it at the sketchy Icelandic event

Five stops including Alaska and Andorra for the first time

Halldor, Eiki and Gulli kill it at the sketchy Icelandic event

Have you got what it takes to be sponsored?

Is this the ultimate powder crew? Pat Moore's Blueprint, plus a sneak peak at Volcom's 'Mr Plant'

Continuing the legacy with Jamie Lynn, Terje Haakonsen and Bryan Iguchi at Baldface

Is this the ultimate powder crew? Pat Moore's Blueprint, plus a sneak peak at Volcom's 'Mr Plant'
We use cookies on our website to give you the most relevant experience by remembering your preferences and repeat visits. By clicking “Accept All”, you consent to the use of ALL the cookies. However, you may visit "Cookie Settings" to provide a controlled consent.
Cookie SettingsAccept All
Manage consent