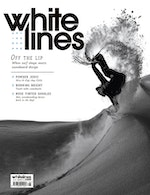 Wow, how did that happen? This season has literally flown past, and we already find ourselves on our March Issue!

But don’t worry, just because it’s the final issue of the season, doesn’t mean we haven’t packed it absolutely ram-a-jam full with banging images and articles to tickle your snowboard fancy.

Here’s what you can expect to find when you pick up this fine-looking issue from your doormat (or your local newsagent if you haven’t yet subscribed).

TORAH BRIGHT INTERVIEW: AUSSIE RULES
With the competitive snowboarding world gearing up for the Sochi Olympics next winter, we caught up with one of the favourites to take the women’s halfpipe gold, the lovely Torah Bright.

Having won the top prize in Vancouver, Torah largely disappeared off the radar until this season.

So where has she been, and why is she back now? Find out here.

THREE AMIGOS: GIGI, NICO AND DANNY DO CHILE
If (like us) you’ve wondered what it would be like to hang out with the likes of Gigi Ruf and Nicolas Muller while they’re filming, wonder no more.

Jon Weaver headed down to South America with the Red Bull Ultranatural-bossing pair and Danny Kass to watch them work up close.

What he saw made a big impression on him.

SHOULDA BEEN HERE YESTERDAY?
It’s easy to idealise the past; to look back with rose-tinted spectacles and claim that things were better when snowboarding was simpler and when (as the famous Bluebird wax sticker once put it) skiers “hated us”.

But is this really the case?

Chris Moran looks at the evidence, weighing up the pros and cons of snowboarding in each decade from the 80s til today to decide which was actually the best.

The results? Well, you’ll have to read it to find out.

THE FUTURE OF SHAPE
While different forms of rocker and camber seem to be constantly going in and out of fashion, the basic shape of a snowboard has remained largely unchanged for the best part of 20 years.

Recently however, a quiet revolution has been fomenting in garages and back-room workshops, where die-hard shredders are starting to experiment with weird and wonderful forms and shapes.

And increasingly, these experiments are starting to impact on the designs put out by mainstream manufacturers.

Is this the future? Well if it is, you can say you saw it here first.

PLUS:
8 spring shredding ‘shackets’ tested.
Ben Kilner teaches you backside spins
Kevin Sansalone reveals how he became a Whistler legend
Dom Harington talks the ‘Lympics and why he likes Shaun White
We take a close look at Bataleon’s Camel Toe… (amongst other boards.)

All in all, this month’s mag is a banger. Or at the very least a great way to pass the time on the toilet.

Now THIS is what a slopestyle course should look like...

Now THIS is what a slopestyle course should look like...

Read what unfolded in the final event at this years Brits

British Snowboard Championships 2013 - Sam Turnbull and Katie Blundell win the Protest Slopestyle
We use cookies on our website to give you the most relevant experience by remembering your preferences and repeat visits. By clicking “Accept All”, you consent to the use of ALL the cookies. However, you may visit "Cookie Settings" to provide a controlled consent.
Cookie SettingsAccept All
Manage consent