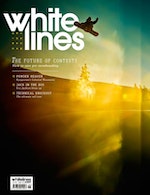 Exploding into 2013 like a Travis Rice powder landing (or should that be Mayan meteorite?) comes the January issue of your favourite snowboard mag. Don’t be fooled by the apocalyptic cover – we’re sticking two fingers up at the doom mongers with another 148 pages of primo time wasting material. I mean if it’s the end of the world, we may as well go out in style…

ERIC JACKSON: THE ONE THAT GOT AWAY

A breakthrough winter in 2012 saw ‘E-Jack’ land a Video Part of the Year award and embark on an epic road trip from Alaska to Chile. We tracked down this brother on the run to talk beards, backcountry and sibling rivalry.

Most people would struggle to place it on a map, but this country with only one vowel hides some of the most epic high altitude terrain on the plant. WL took to the yurts in search of perfection.

THE FUTURE OF CONTESTS

With so many rival events these days, it’s safe to say that competitive snowboarding is a confusing world. Will it ever be fully understood by a mainstream audience? And does it want to be?

Four domes, four weeks and a head-to-head battle between the best rail riders in the country. WL’s new jib tour steps into the ring, and this month’s mag features the unseen cream of the shots.

All this, not to mention the chance to win a trip of a lifetime to Colorado in our Golden Ticket competition, can be yours for the modest sum of £4.95. What are you waiting for? Make like Charlie of choccy factory fame and get down that newsagent!

Check out the first set of edits to be submitted to this year's Absinthe editing comp.

Some of the fastest, most effortless 450-offs you'll ever see...

Check out the first set of edits to be submitted to this year's Absinthe editing comp.

Some of the fastest, most effortless 450-offs you'll ever see...

"I remember a time when he was posting over 400 selfies in one day..."

2013 US Grand Prix Slopestyle at Copper Mountain: Chas Guldemond and Jamie Anderson get it done

...and our boy Billy Morgan gets fifth!

2013 US Grand Prix Slopestyle at Copper Mountain: Chas Guldemond and Jamie Anderson get it done
We use cookies on our website to give you the most relevant experience by remembering your preferences and repeat visits. By clicking “Accept All”, you consent to the use of ALL the cookies. However, you may visit "Cookie Settings" to provide a controlled consent.
Cookie SettingsAccept All
Manage consent